skip to main | skip to sidebar

hi guys,
feel free to see the ride report and many trip photos at http://www.singaporebikes.com/forums/showthread.php/324513-lt-Trip-Report-gt-Gua-Musang-to-Lake-Kenyir...-the-road-less-traveled?s=ce37e114c02b6520ee958f17b4f88cb1

thanks!
Posted by Malaysia Magna Riders at 9:00 AM 3 comments:

Hi guys,
I am happy and excited looking forward for the next bike trip to Lake Kenyir from 29- 31 May.
Lake Kenyir is the largest lake in Malaysia. Its 340 islands, 14 waterfalls and 2 caves are home to an abundance of fresh water fish, exotic wild-life and flora and fauna.
A new friend of mine from Singapore, Mr Daniel is going to join me for this trip. I never meet him before, I am excited to fellowship and ride with him very soon.

The following should be the finalised route and itinerary:-
29 May (day 1):
Depart from Segamat at 5am and reach Bentong at 8am.
After breakfast, heading to Gua Musang- Kenyir Lake. ETA Kenyir at about 3pm. 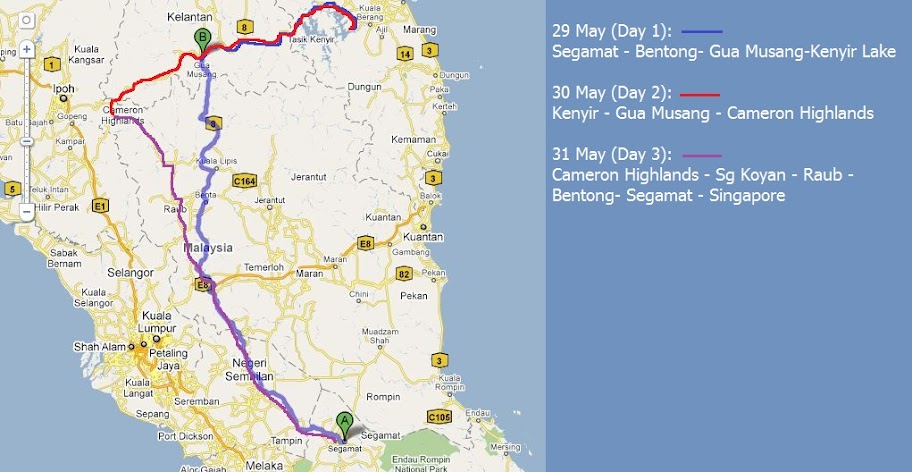 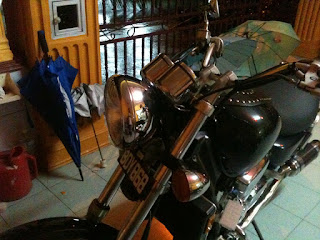 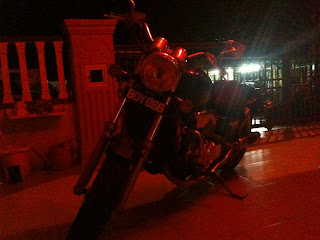 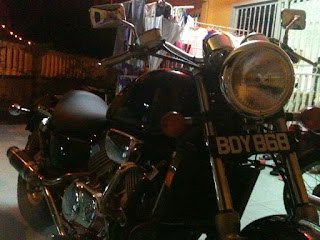 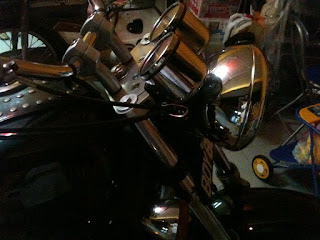 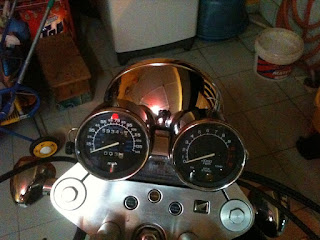 Just changed the headlight to a bigger one, the bike looks bigger now :)
It is a Vulcan 800 Classic headlight, spent USD165 to buy it and spent 1 hour to mount it on my Magna. Love it!
here is the video i just made for my magna with the big headlight
http://www.youtube.com/watch?v=fWGujhVfRuk
Posted by Malaysia Magna Riders at 5:22 AM No comments:

I sold my 2nd Honda Magna 3 years ago (1st Magna sold 4 years ago), and now it is time to get back to another Magna! I was thinking most probably I am the only person on earth that own 3 different Magna at different time, hehe!
Really miss my days of riding Magna, as she is one of the best power cruisers you can find.
My 3rd Magna will be a year 1993 bike, just got the deal done yesterday, and my brother will ride it home on Friday(28th Jan). The bike comes with a 4 into 2 custom made exhausts (which i dislike), will put the stock exhausts back.
here is the picture of the bike: 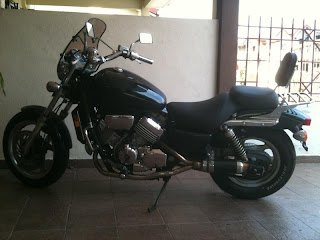 And I plan to get the awesome original design Magna tank emblems from ebay: 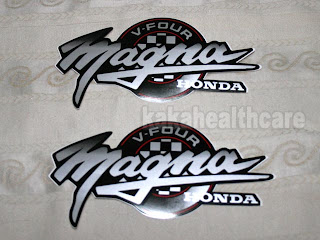 Posted by Malaysia Magna Riders at 5:51 PM No comments: 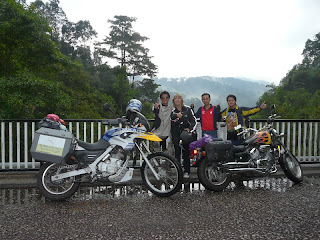 Mount Ophir, known in Malay as Gunung Ledang, is a mountain situated in the Gunung Ledang National Park located in Ledang District(northwestern Johor), Malaysia. The summit is located between the border of Muar and Malacca. Standing at 1,276 m (4,186 ft), with a clear trail leading to the peak, the mountain is a popular destination among amateur climbers. Mount Ophir is also the 64th highest mountain in Malaysia and arguably the most climbed mountain in the country, despite it having one of the higher climbing fatalities in the region of South-East Asia. 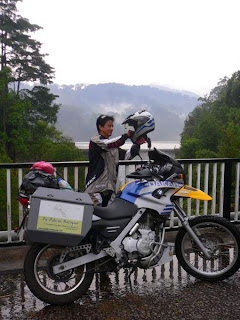 Sheen with his Iron Horse 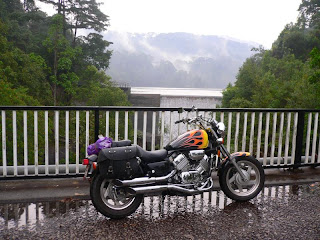 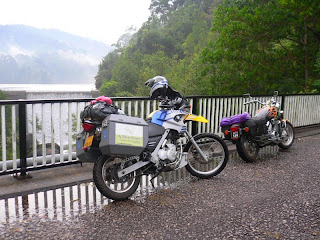 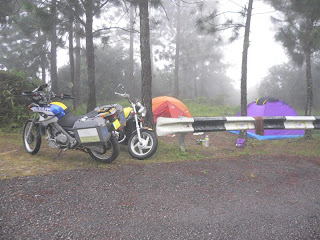 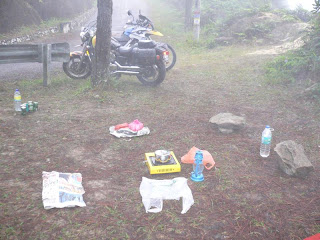 For more details of Sheen's adventures, log on to: 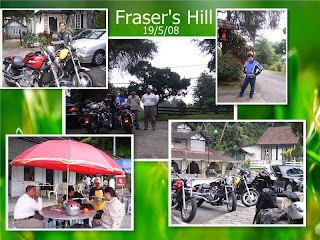 Hi there! We just back from a wonderful trip to Fraser's Hill on 19th May 08. Thank God for His protection and the nice weather during our trip :-)

Our trip began on Monday morning, 19th May 08. I rode to Ricky's house in Malacca the night before we left to go to the Sg Buloh R&R to meet the CK Yeong on the next morning. I want to take this opportunity to thank Ricky and his wonderful family for their hospitality. They brought me out for a nice dinner too :-)

Around 7a.m., as planned, we reached Sg Buloh R&R and we were having our breakfast there while waiting for Yeong to arrive. 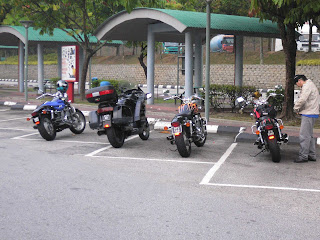 Our RV Point: Parking at Sg Buloh R&R for breakfast and refuel. 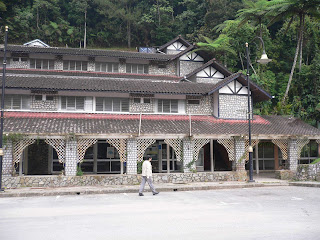 Yeong was desperately looking for toilet :-> 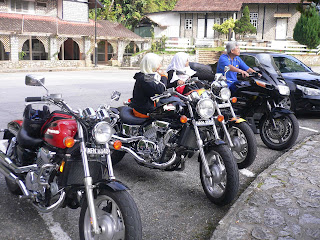 We parked our bikes here, 2 Malay girls and their father posing with our iron horses :) 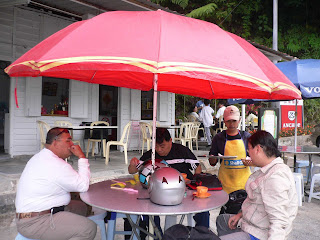 Yummy...we had our meal here 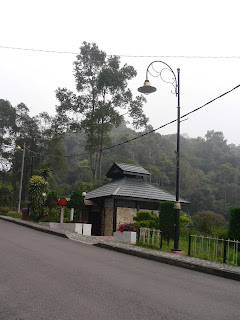 "Hey! Yeong, this is the public toilet that you looking for, pay 30 cents and u can be set free now, haha" 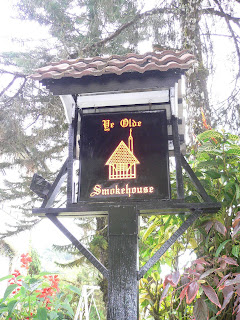 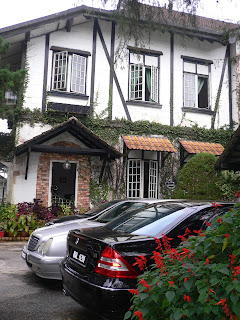 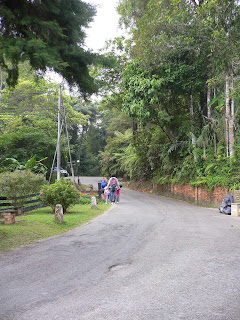 A Japanese tourist was taking photo for his family 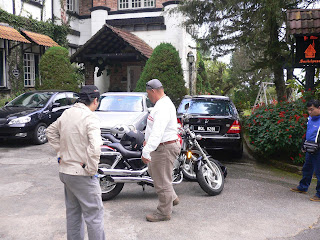 Yeong, Ah Heng and Ricky on "Bike Talk" - "how to make your bike shinning" 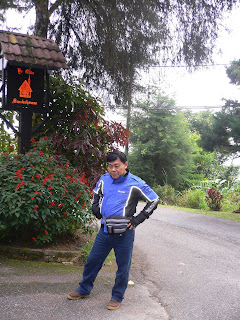 The coolest posing of the year :) 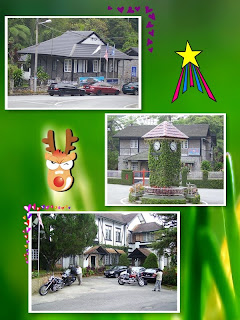 After spending 10 mins at the Smokehouse, we left Fraser's Hill at 12pm noon. 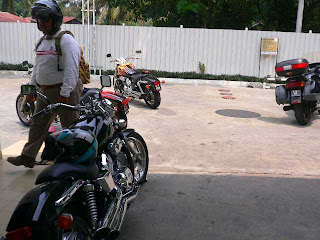 After refueled, we straight away back to Kuala Lumpur, proceed to Sunvey Cycle, Ah Heng wanted to change his bike's tyres. Around 4.30pm, we were on our way back to our respective home in Malacca and Segamat. Sayorana!

In summary, I can't begin to thank all of those involved in the trip. I had never been on a bike trip to Fraser's Hill, it was a quest, a lot of corners and curves. A challenge to see if I could do it. Not only did I do it, I thoroughly enjoyed it!

Again, many thanks to Ricky for housing and "feeding" me :) You and your family are wonderful.Also a gain for me to know a new friend, Ah Heng, a friendly and funny guy, great to have you joining us.
Finally, to all the members of this trip, I say...ride safe and thanks for the good times.See you guys again soon!

Hi everyone! After a few months of silence , we are back in action :-)
This time, we are going to ride to Fraser's Hill.
Fraser's Hill (Bukit Fraser) is a colonial-era hill station in Pahang state, Peninsular Malaysia.
Fraser's Hill is located 105 km north of Kuala Lumpur, around 2 hours ride. 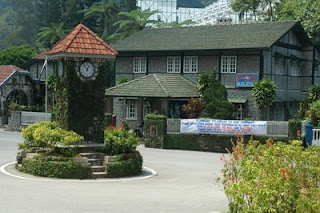 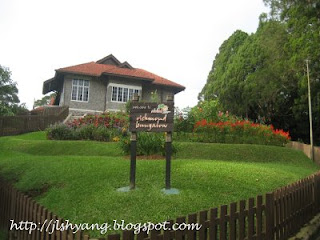 Fraser's Hill is named after Louis James Fraser, a Scotsman who prospected for gold in Australia but eventually struck tin here instead in the 1890s. Employing Chinese miners to do the hard work for him and earning his keep by operating mule trains down the mountain, Fraser set up opium and gambling dens to increase his profits, which may have had something to do with his subsequent mysterious disappearance. The tin ran out in 1913, but the lush valley within was rediscovered as a colonial hill resort that, thanks to its 1524m elevation, enjoys considerably cooler temperatures than Kuala Lumpur. By 1922 a road had been cut through the mountains to the valley, which soon sprouted bungalows and even one of Malaya's first golf courses. 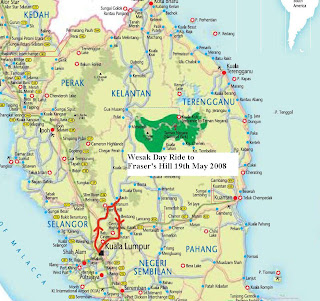 Posted by Malaysia Magna Riders at 2:26 AM No comments:

Reviews of Honda Magna VF750C by the experts

More pictures of our rides and bikes

One of the most active Magna riders forum (US based)

Lack of ideas to upgrade your Magna?visit Magna Accessories page

Visitors to this site